So, after doing an HPDE at NCM, Optima events at AMP and Road America, and the DriveAutoX and UMI King of the Mountain, it was getting to be time to replace the brake pads on the Probe.

I’ve never been very confident in the braking on this car. The previous owner had repaired some rusted and burst brake lines with long runs of flexible AN line, which led to a spongy pedal. After the Road America event, the master cylinder also developed an internal leak, making the pedal even mushier. I also totally boiled the fluid at AMP and almost ended up in the sand trap after turn 1, so, oops?

But nobody makes a “big brake kit” for a Probe. Even if they did, such a thing wouldn’t go along with the theme of being cheap.

But a junkyard solution existed. Many years ago, somebody figured out how to use a rotor from a Mitsubishi 3000GT/Dodge Stealth (12.75″ vented), a set of two piston calipers from a Mazda Millenia, and an adapter bracket, to basically double the braking capacity of the front axle.

But the guy that made the brackets doesn’t make them anymore. Lucky me, my friends at Cold Lotion Racing had a set of the brackets, so copied them.

Some plate steel and tube from McMaster-Carr, a $176 plasma cutter from Amazon, an order from Rockauto for rotors ($10 each!) and calipers, and a new set of R4S compound pads from Porterfield Brakes gave me the raw materials.

Making the brackets wasn’t difficult. Cut the steel tube to length with a bandsaw, weld them to the proper holes on the brackets.

Pulling the old brakes off is a pretty tame endeavor. I left the calipers connected to the brake lines to avoid a mess while I mocked everything up.

Once I had test fit it all, I painted the parts with caliper paint, and cured the paint using my gas grill.

So, on to assembly!

I put an axle together, and it looked awesome:

Now, this looked great. But they didn’t turn. The rotors were contacting the inside of the calipers in several spots. After several hours of futzing with shims, I finally gave up and pulled them off. I took them to a local auto parts store when they put them on the lathe, it was obvious: the center bore wasn’t drilled in the center of the hat. The rotor was spinning in an ellipse. Derp.

So, back to Rockauto. They refunded my money and I ordered another set of rotors. Since I hadn’t cracked the brake lines, I just pulled the brackets, put the stock brakes back on, and moved the car back outside while I waited for the new rotors to show up. So there’s the lesson: when doing a brake upgrade, leave the hydraulics CLOSED until you’re sure it’s going to work, other wise you’ll have to bleed it twice when you fall back to the stock setup, and that wastes a lot of valuable time and expensive brake fluid.

Another issue with this setup: the center hole in the 3000GT rotor. The hole is ~69mm. The hub lip on the Probe is ~72mm. The correct way to open the hole up would be to put the rotors on a lathe and open it up. I don’t have a lathe. I used a Dremel with a carbide bit to slowly open up the hole. I also used a dial indicator to check runout to make sure the rotor was flat on the hub:

So, the next bit is to mock up the caliper to see if it’s centered over the rotor:

It took about an hour each side of putting it together, checking clearances, and taking it back apart and adjusting the shims to get it right.

Once it all lined up, I torqued the bracket down, installed the rotors for the last time, cleaned them all with brake parts cleaner, loaded the calipers with my new Porterfield R4S pads, and put the wheels back on. 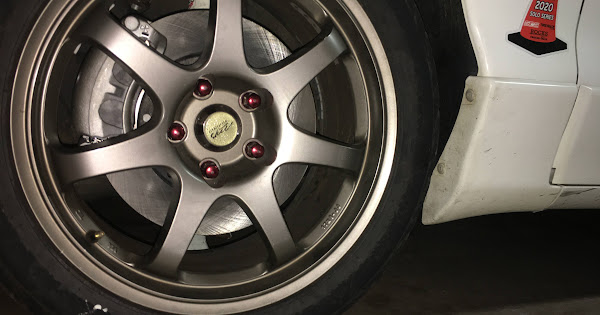 Following this, I moved on to the rear and replaced the pads with R4S compounds as well.

Then it was time to drive it around the block. HUGE difference. The bedding procedure for the R4s is basically ~100 miles of gentle street driving, so I’ll need to run some errands with the car over the next couple of weeks.

But just running around the block to park it? I didn’t put my seatbelt on and almost ate the steering wheel. Oops. I think these are going to work out fantastically. I also have some driving to do. The R4S pad’s recommended break-in is ~100 miles of normal driving, not a typical eight stops from 60 and cooldown some pads need.

Fingers crossed the weather cooperates and it’s not too hot to put around in a Probe with no A/C.