Round four of the 2020 Optima Search for the Ultimate Street Car was at Atlanta Motorsports Park this past weekend. The Probe was in attendance, making it’s USCA debut.

Let’s talk about Atlanta Motorsports Park (AMP). This is a country club, but instead of a golf course, they have a race track. It’s carved out of the top of a mountain near Dawsonville, Georgia, about an hour northeast of Atlanta. The club has a kart facility plus the main circuit, a Hermann Tilke design (he also designed COTA).

I arrived at about 2pm on Friday. The Optima rig was still being set up, but tech was active. Since the facility is a country club, not a venue intended to handle large events, space was tight. USCA officials intercepted me when I got through the gate and directed me to unload, and drop my trailer in the grass overflow lot. I was reserved a spot for my car and support vehicle up by the Optima rig. The cozy quarters turned out to be awesome. At places like NCM, my paddock spot could be as much as a quarter mile from the Optima rig and – more importantly – a clean bathroom. Not so here. Everything was bunched up together. It was crowded, but once everybody was settled in, it was awesome.

The Probe sailed through tech. Full points on the D&E equipment check, and I passed my fire drill, exiting the vehicle in about three seconds, well below the required 12. 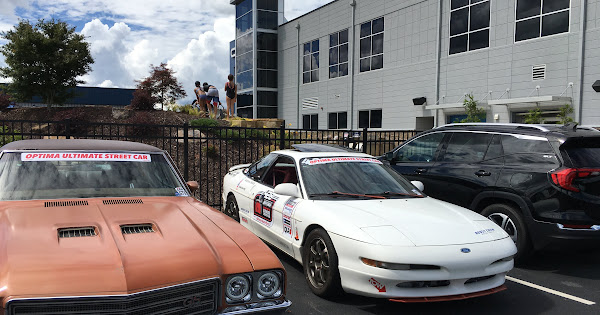 COVID mitigation? Yes! All of the USCA officials were masked, as was I. Most people observed good distancing and masking discipline, which was awesome. Registration and waivers have been turned into an electronic no-touch situation. In person meetings have been reduced, and participants are asked to spread out. That kind of adherence to public health guidance is what is making it possible to hold these events during the pandemic.

Next up was walking the autocross course. Now, AMP doesn’t have a large autocross pad, so the event organizers improvised a course. We ran a section of the road course backwards, with some slaloms and offsets added. They didn’t do much to slow things down though. The autocross was nearly 1.1 miles long!

Having completed everything I needed to do Friday, I headed to the hotel. Which was awful. There was no furniture. The chair was broken, I sat in it and leaned back and it nearly flipped me over onto my head. I used my tool trunk as a table and my cooler as a place to sit while I ate my dinner. The TV didn’t even work, and they didn’t vacuum the floors when servicing the room.

I’ll call them out by name: The Super 8 in Dawsonville, Georgia. Avoid it. It was absolute shit.

So, the next morning, we did Autocross and Design and Engineering. Here’s the autocross:

The course was LONG. And it really penalized low horsepower cars. All of the uphill runs were preceded by offsets that cut off the racing line and slowed me down. After that, it was just picking my nose while the poor car chugged up the hills. Still, while I was last in GTC, I was not last at the event. Achievement unlocked.

You might need your readers, but in the judged portions of D&E, I scored above 5 in every category. With a 23 year old Probe that had sat outside for two years and didn’t even run when I got it. A score of 5 is supposed to indicate stock/OEM levels of quality and prep. So, in the eyes of these judges, I have managed to improve the vehicle into something better than stock. That’s a huge deal.

Prior to the road rally, there’s a meeting where they tell us the route. Part of that is cookies. The organizer’s wife bakes these cookies and decorates them to reflect the track, and they’re given out to people that something notable has happened for. I won a set of cookies for the brazen act of bringing Probe to an Ultimate Street Car event. It was my first cookie award. Some people have kept them as trophies. But my blood sugar crashed Sunday morning, so I ate them. They were really good. You know those sugar cookies you get from the store that are so sweet they make your teeth hurt? These were not that. These were perfect.

The Road Rally was a quick jaunt to the Dawsonville City Hall and back. No issues there.

Sunday, as usual, is the road course and speed stop challenge. Running AMP’s main large layout was the whole point of coming to this event, and the track did not disappoint. Massive elevation changes, technical corners, almost never going straight anywhere. It’s a rollercoaster in a car. One of the hills is a 100 foot climb. For a low horsepower car like mine, momentum becomes critical.

Once again, last in class, but not last at the event. And ironically, with all the cones out of the way, the distance from my time to the next person was less than during the autocross segment! There are a couple of braking zones I needed to brake harder, later (the downhill right after start/finish and the downhill into turn 5). I’d hoped to work on those areas during my afternoon sessions. Going around that big sweeper on onto the front straight with the throttle matted wide open was an experience. It also greatly improved my confidence in this car.

I got two speed stop runs in. The speed stop was over on the ice rink, which is a skid pad that’s had a portion painted and has water systems to make it slick as ice. If you check out the facility on a satellite image, you’ll see a big blue crack pipe looking portion. That was  the speed stop. Down the hill, around the circle, and back up again. Speed stop is always won by whoever has the most power and brakes. Which is not me this year.

And then lunch. But during lunch, I was alerted by an official I was dragging something. Looking under the car, my O2 sensor wiring had come out of the zip-ties and was hanging below the car. Easy fix!

But, when I jacked the car up, I found a nut. The nut that held in my front motor mount through-bolt. I did not find the bolt. I also dropped my sunglasses in the lot and they were run over. Grrr.

I made a trip to the nearest open hardware store, and bought some bolts and a $3 pair of sunglasses. Alas, the longest they had was 80mm. This thing needed 100mm. I was done for the day. The car ran just fun with a motor mount bolt gone (It has FIVE mounts, after all), but the rear mount would have to take up all the slack from the front mount being disconnected, and the rear mount is giant pain to replace. The better part of valor would be to put it on the trailer and not destroy that rear mount. So, I ate a sandwich, said goodbye to everybody, loaded up, and headed for home. 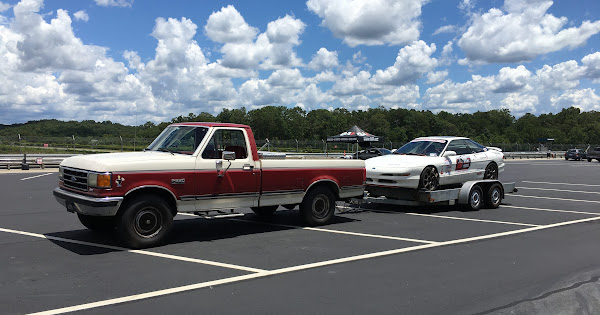 All in all, it was a successful event. I scored 359 points towards the season. This is critical. Since I have zero chance of winning an event with this car, my only path to an invitation to the Ultimate Street Car invitational is to score enough points through the season to get in after the last event. At that point, everybody in the class that’s won their way in gets in, and the also the next three. With eight events leading to eight winners, I need to place 11th or higher over the entire season to win my way into the invitational and my second trip to SEMA.

This even catapulted me into 10th place. So we’re on track. The plan is working. Stay tuned. This upcoming weekend is round three of the DriveAutoX series, with a ticket to UMI’s King of the Mountain on the line. Two weeks after that, we take the Probe to Road America, one of the biggest of the big boy tracks.

A full gallery of shots from the weekend can be found here.