So let’s talk about seats for a bit. Seats are important. Seats keep you in front of the steering wheel while you’re driving. When you turn, seats, combined with the seat belts, keep you from shifting around inside the car. In a crash, seats and seat belts keep you from getting crushed, either by slamming into the rear seat (or the passengers that might be there) or eating the steering wheel. They’re very, very important.

That said, the seats that came in GM products of the ’80s were designed to meet safety standards of the time as well as the desire of the typical ’80s customer for a smooshy, compliant seat. While the Grand National got a decent set of buckets for the period, the foam is still smooshy and the bolsters are set up for a person much wider than me. In a recent autocross, I was using my grip on the steering wheel to keep in place, and the tilt mechanism gave out. The wheel dropped into my lap, and I nearly spun the car out. Not good.

Not too long after that, an acquaintance of mine was racing his Malibu in Lexington, and his entire column failed, and he actually did spin the car. No bueno.

So I bought some seats. What I chose were some black buckets from NRG. I got the pair at Amazon for $299. They’re a ripoff of the Recaro bucket seat you could find in the 2000 Honda Integra Type-R. I picked them because I remember my friend’s Type-R and how well I fit in those seats. Honda made them to fit smaller Japanese customers, not fat Americans, and I fit in them perfectly.

Step one was removing the stock seat, and vacuuming up all the dog hair that was under them. 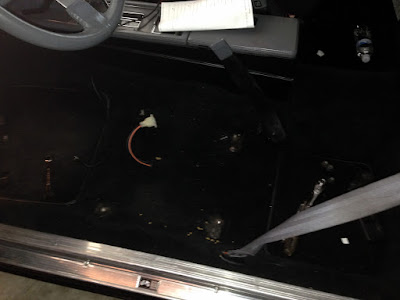 After removing them, I bolted down the brackets I sourced from Wedge Brackets. These things saved me gobs of time. Fabricating brackets would have taken me hours, and Wedge makes brackets and sliders for OEMs, so I have a bit more confidence in the safety of these in a collision that something I would have made myself. 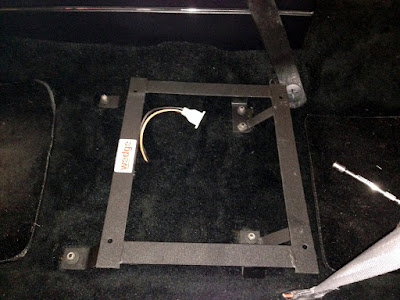 Next step is getting the sliders bolted onto the seats. The NRG seats came with their own double-locking sliders, so I used those. 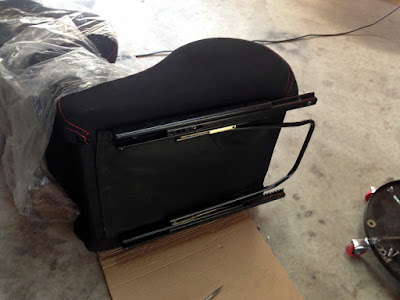 The NRG seats showed their Chinese-ness here. The bolt holes for the sliders were covered by fabric, I had to locate them by feel, then use an awl to punch holes in the fabric for the bolts to run through. Annoying.

After that, it was a matter of bolting the seat/slider assembly to the car. 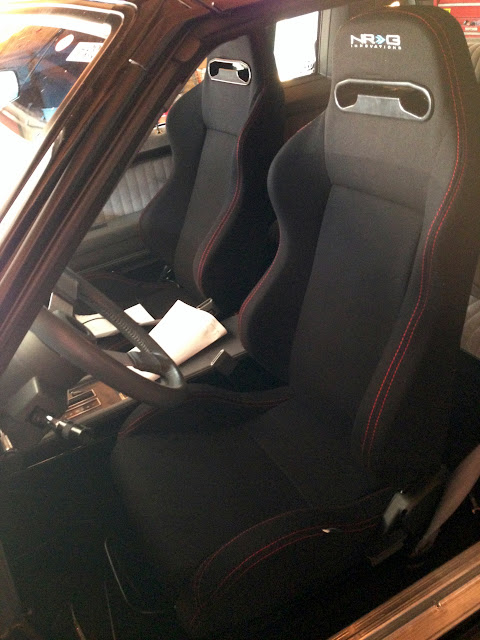 Thoughts on these seats? They’re cheap. The fabric isn’t top-notch. The foam is very firm. In fact, I’ve gotten a new appreciation for how stiff my suspension actually is. The old seats sucked up a lot of the smaller bumps. The lack of squish in the cushions also means I’m sitting slightly higher in the car than I was. I may need to swap out for thinner sliders. The bolsters are fantastic. My skinny posterior fits perfectly and they upper bolsters seem to contain my shoulder and midsection pretty well. I’m able to take corners at speed with just fingertips on the wheel, and that’s using just the three point seat belt. Final verdict on how well they hold is reserved for the next autocross. I’m hopeful I can get away without a harness, because I need my back seat to remain usable.

These are also light compared to the stockers. With sliders, they’re 25 pounds each. The brackets are about 2-3 pounds. The stock power driver seat was over 50, and the passenger seat was close to 40.

But the best benefit? My irreplaceable stock seats are now wrapped in plastic and in the basement, safe from sweat and spilled drinks for the foreseeable future.