When I rebuilt the engine back over the winter of 2017/2018, I selected things with an eye towards eventually getting back to E-85. I had run it for a few years back, while still on the stock turbo. Once I upgraded my turbocharger, I no longer had enough pump or lines to run E-85.

But when I had the engine out, I put in a Racetronix 450lph pump and their upsized line kit. And over the winter, I swapped in a set of Deatchwerks 90lb injectors. All that remained was a flex fuel sensor and a wiring harness.

Well, today I drove the five miles down the road to Boost Crew Motorsports, where my flex fuel sensor and wiring harness had been waiting for me to get a free weekend since sometime in early March.

With the fuel pumped out of the tank, Brad and Craig set to work cutting the return line and mounting the sensor in the area above the rear axle. The wiring harness runs from the sensor up to the front of the car and connects to the old MAF connector.

Splicing the Racetronix lines was the hardest part, but Brad made quick work of it.

Once the sensor was plugged in up front, we turned the car on and enabled the sensor. 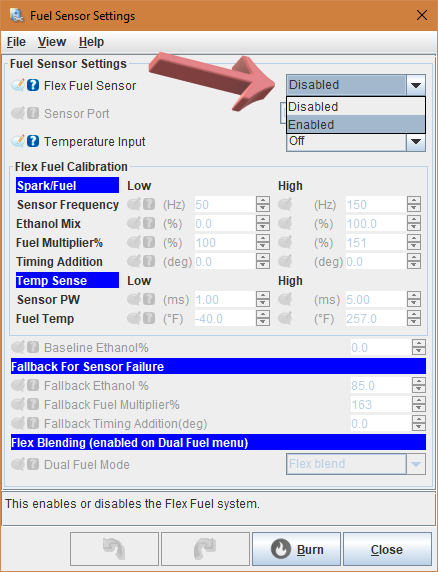 Now, this is where the TurboTweak ECUGN earns its keep. In a normal flex fuel situation, you’d have to tune the gasoline map, then fill it full of E85 and tune an E85 map, then use map switching to interpolate between the two maps.

But this is thermodynamics. At WOT, this engine is going to consume 153% as much E-85 as it would gasoline. That’s just the way it works.

So, once the option is enabled, the rest of the dialog becomes available. 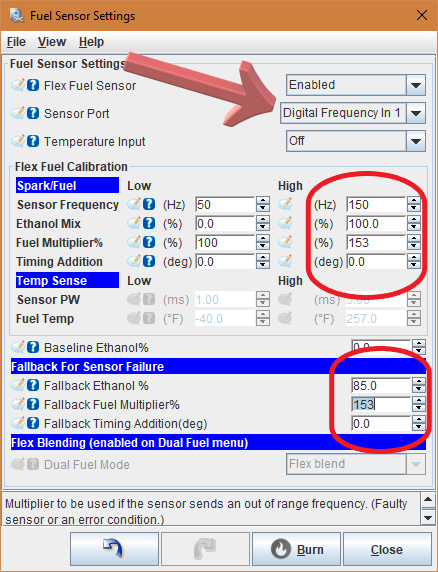 So, if you’re still using the factory wiring harness with your ECUGNU, the old MAF sensor is wired to Digital Frequency In 1, so set that as the input. If you’ve mucked with the wiring, well, you’re on your own.

The next things you’ll change are in the second block. The fuel multiplier is 153% at 100% ethanol versus 0% ethanol, which is what my gasoline map was tuned on. The fallback block is for sensor failure. If the sensor fails, we’re going to assume full on 100% ethanol. Why? To keep it from going lean and melting. If the mix in the tank is 60% ethanol, but the sensor fails, it’ll go pretty rich and run like crap, but it won’t blow up. Not blowing up is the goal.

Hit the “burn” button and close the dialog. You will need to power cycle the ECUGN with the key.

Then start it. Mine fired up on the first turn and purred like a kitten.

Now here’s the thing: this is a genuine flex-fuel system. I can now run gasoline, E85, all the way to pure Ethanol. The computer will sense the change in concentration, and scale the fuel table accordingly. This is a big deal. The car is technically tuned for 93 octane gasoline. For safety I’ve been running on 100. One hundred octane VP is $9.90 a gallon at the pump at NCM. Mixing my own 100 using pump 93 and Boostane costs ~$5 a gallon, and the Boostane leaves orange deposits on everything and messes with the gas gauge. And it’s REALLY poisonous, so handling it must be done carefully.

Today I bought ten gallons of E85 from my local Thorntons. We tested it and it came out to be 86% ethanol. The E85 around here is high quality. And it was $2.11 a gallon.

True, but I’m not concerned about mileage. I need a knock resistant fuel that’s cheaper than race gas. But let’s do the math.

Overall consumption will be ~30% more per mile driven than gasoline. WOT will be 53% more, so how’s that cost work out?

So, the equivalent of one gallon of $9.90 race gas costs just $3.23 at today’s E85 price. That’s a savings of $6.67 per gallon equivalent. But, if I find myself out somewhere and E85 isn’t available, I can mix some up with some pump 93 and Boostane and keep racing or run race gas. The computer will adjust.

This mod is going to pay for itself after just one race weekend.

Left to do? The timing. Ethanol burns slower than gasoline, so I will need to adjust the timing addition field and add some timing. But I have no idea how much. I need to get to a dyno or a drag strip where I can test the car and walk that number up until we hit the sweet spot. Until then, I left it at zero.

Big thanks to Brad and Craig at Boost Crew. We knocked this out in just two hours. They know what they’re doing. Give them a call if you need Buick work done and don’t have the time or inclination to dive in yourself.