I had the honor of participating in the first Speedway Motors CAM Challenge East, hosted by the SCCA at Grissom Air Base in Peru, Indiana, this past weekend.

To say it was a blast is an understatement. The course was fast, the cars were incredible, and the people were fantastic. The contrast between this event and the National Tour event I ran way back in 2003 was astounding. These CAM folks are fun to be around. Everybody enjoyed themselves. The “ringer” cars that whiney people said would show up and clean everybody’s clock showed up, and some clocks were cleaned, and NOBODY GOT UPSET. Because this crew appears to show up to have fun, not win. That is a novel concept for a national-level SCCA event. 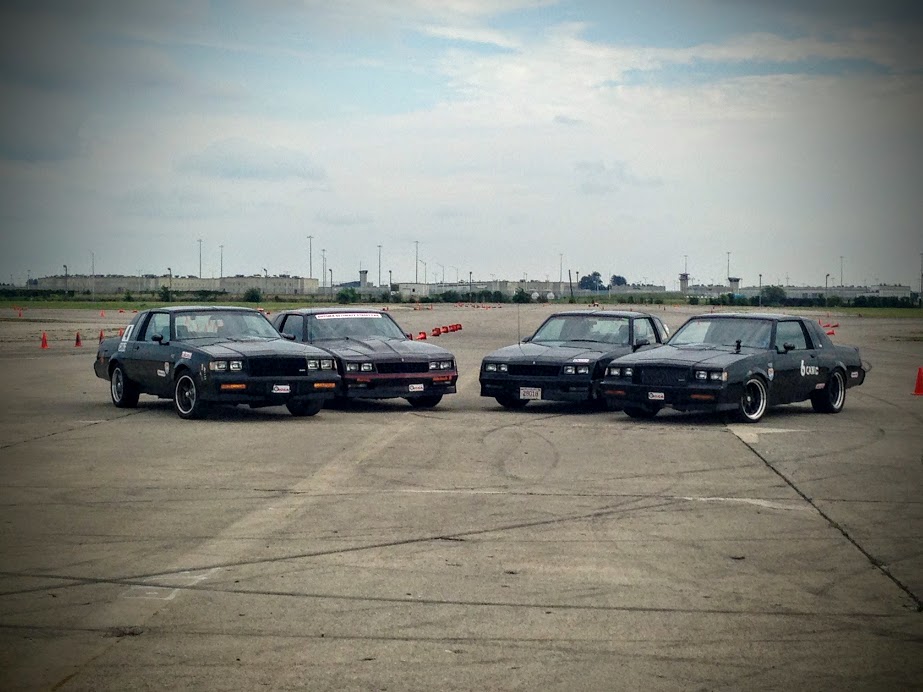 The G-Force! from left to right: Andrew Scott, Lance Hamilton, Dave Nutting, James Bishir
One of the highlights was meeting up with some fellow G-Body owners. We had four: Myself, Lance Hamilton, Dave Nutting, and James Bishir. James is especially notable because this was his first ever autocross event. He was the perfect n00b. He asked questions, he talked to people, he listened, and he improved every single run. His first run, he was ten seconds off pace. By Sunday morning, he had beaten me by seven hundredths of a second.

Another treat was getting to watch Robby Unser and two-time Indy 500 winner Al Unser Jr. up close. They were both running in beautifully engineered machines built by Speedway Motors, and they were both blisteringly fast. But much to what should be the consertnation of the CAM doom and gloom crowd, the Unsers didn’t prevail in CAM-T on Saturday. Nope. They showed up with pit crew in professionally built race cars, and themselves were professional race car drivers with multi-decade careers. On Saturday they got beat by a kid – Cody Mason. And nobody was mad.

Takeaways for me? I need more tire. A lot more tire. I was running on 245mm tires, and was probably on the narrowest tire of any car at the event. Dave Nutting was also on 245s. James Bishir was running 275 in the front, 295 rear. Lance Hamilton had 275 all around, and everybody that beat all of us was on 305-315mm tires. Steamrollers. Thanks to being able to eyeball Lance and James’ cars, I can start planning on what I need to do to run similar sized rubber next year.

Here’s a link to my Google photo album from the weekend:
PICTURES!